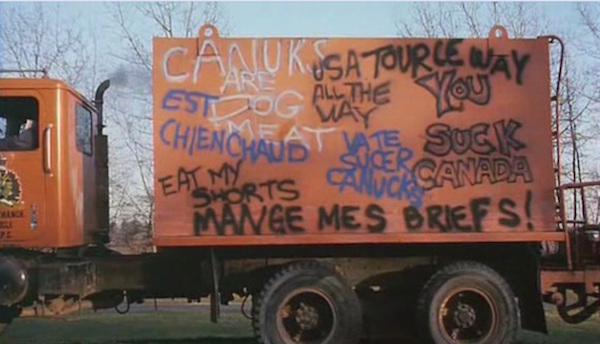 A look at the film ‘Canadian Bacon’ directed by Michael Moore and starring John Candy.

Crumbs! George W Bush’s election to the White House feels a whole lot less controversial having lived in an era where Clinton and Trump have engaged in their public mud-slinging.

As a Brit’, I’m not directly affected by the decision America makes, but I can watch on in bemusement and shake my head in disapproval as two people who nobody wants to vote for, fight for the ruling seat of a world superpower.

What strikes me as most noteworthy is that when speaking to any American on this subject, it’s a case of “I’m voting for X because I don’t like Y” and vice-versa. Not once, have I heard anyone say their vote is being cast because of the policies being discussed.

One thing is for certain; this election ‘will’ be a film within the next five years. I mean, everything is a film these days. I opened a new carton of orange juice the other day and already I’ve sold the film rights to Hollywood for a hard-hitting summer blockbuster action movie. The only other certainty is that if ‘Clinton Vs Trump’ isn’t an edgy political thriller, it will be a Michael Moore documentary.

What some people don’t know, however, is that before Michael Moore became a scruffy conspiracy theorist, he was responsible for a film called ‘Canadian Bacon’ which gave the mid-nineties a satirical slant on US politics.

The premise is simple and brilliant; A weak and inadequate president is coming up to the end of his first term and in order to be re-elected, has to come up with a plan to sway the public vote. His military advisor points out that every president who has started a war has gone on to be re-elected. With nobody left to go to war with, the US starts a cold-war with an unsuspecting Canada.

John Candy stars in what was to be his second-from-last film before his unfortunate death. As per usual, he delivers a typically John Candy performance; slightly over the top but just perfectly so for the type of character he was given. His co-stars are even more over the top, almost to the point of being a bit too much – I’m looking at you Rhea Perlman – and makes the closing act of the film just a little more mad-cap than it needed to be.

It’s as if the director forgot which film he was making and turned a political comedy into something more akin to a Mel Brooks movie. While Mel Brooks commands a lot of respect for the films he has made, this style of story-telling feels out of place in this feature. Perhaps this unbalanced, haphazard approach is responsible for the generally low public opinion of the film. But I think the public opinion is a little harsh. Beneath the blemishes is still a well-written piece of observational commentary on how America allows itself to suffer at the hands of the elected officials and how the rest of world can fall victim to these people on a whim.

There’s nothing particularly artistic about the film. It relies purely on the content of the screenplay to deliver its message. There are some particularly funny parts; the drive to Canada while attempting to sing along to Bruce Springsteen and an encounter with the Royal Canadian Mounted Police being another. These are just a couple of many great moments that bind together to give you repeated laughs and proves that Moore is a capable comedian when he’s not convinced of a huge media-plot to instill fear into the soles of the American public.

But you would be forgiven for feeling a little underwhelmed once it’s all done and the credits begin to roll. Good though the good bits are, they are ephemeral and seem to evaporate into the ether well before their time.

At a time when politics is causing America and its neighbours something of a headache, ‘Canadian Bacon’ is a light-hearted and worthwhile distraction for an hour and a half and will remind you all that things could have been far worse, whoever manages to get their hands on the nuclear launch codes in the morning.

A reason why you should watch it: Another great turn from the inimitable John Candy who never disappoints.

A reason why you shouldn’t watch it: Because you have a Michael Moore allergy… And who could blame you?

Previous: Room Without a View
Next: Citizen of class.