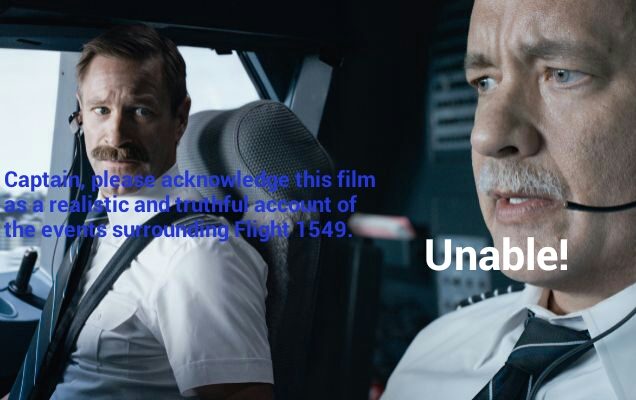 A look at the film ‘Sully’ directed by Clint Eastwood.

Life is full of struggles. Whether it’s struggling with a demanding job, struggling to make your money stretch until the next payday or struggling to decide whether you prefer Mars Bars over Snickers, everyone has some sort of hurdle to overcome.

Some struggles are a little more profound. Individuals who overcame the odds to survive an awful accident or disaster that killed so many others then struggle with survivor guilt. And then there are people who do amazing and spectacular things with all the best intentions, only to find themselves being vilified by the authorities.

This is the theme for Clint Eastwood’s most recent film, ‘Sully’, which shows us the efforts of two commercial pilots who achieved the near impossible by ditching an airliner in a river with no severe casualties and no fatalities.

I can remember when this story broke in the news. I remember seeing the images of that little Airbus floating in the water with the front slides sticking out on each side with all the people standing on the wings.

It was highly impressive. As something of an aerophile, I am deeply interested in aviation and I appreciate how risky water landings are for aircraft not designed for them. For a pilot to manage it with the grace and style to allow everyone to survive, he must have had a very steady hand and a keen instinct for what his aircraft was capable of.

It seems as if the modern world has almost no interest in an event unless it has been turned into a film these days. This means I’m eagerly anticipating a film in the next few years called ‘Article 50’ which will no doubt be a long talky affair with lots of people in suits all trying to screw each other over. Because there’s been no films like that already.

Despite my cynicism, I was actually quite keen to see this title, if for no other reason than to see a little more depth in the story to all the events leading up to, during and after the incident, beyond what I had already gleaned from the news reports and the ‘Air Crash Investigation’ episode.

I almost went to the cinema for this film, so keen was I to see it, but alas, I missed my chance by accident. Given the cost of the average cinema trip these days, I can now say I’m happy I didn’t watch it on the big screen.

The first big let-down is the way the film opens. We get a sequence where the captain is wrestling the controls of a stricken airliner. At first, the viewer thinks, “Wow, this film doesn’t waste any time getting to the subject at hand.” In the seconds that follow, it becomes apparent that this is not a reenactment of the flight we have come to watch. The plane goes into New York city, between the skyscrapers, clips a building and then plunges into an office block in a big fiery explosion.

Ah! it was a dream sequence. That explains a lot. But it’s also evidence that the film had sold-out even before it got started. Can you imagine being the guy who pitched this to the execs at the studio?

“Does anything explode in it?

“Well, no. It’s the one where they peacefully splashed down in the river.”

“So why should I finance it? What’s the hook?”

“Well, it’s an inspirational story of an ordinary man doing his job and saving a hundred and fifty lives to become a national hero.”

“Hmmm. Okay, go ahead, but maybe sling in a dream sequence or two where he crashes in a fireball. I want explosions, dammit!”

And thus, we now have an opening scene which cleverly does two things; it gives a horrible bitter, sour flavour to fuel our want to hate the film from that point onwards, it also tells us in a manner that is about as subtle as someone sellotaping a lit firework to your testicles that the film will simply spend and hour and a half telling heinous lies and that it has as much basis in reality as a typical news article in the Daily Mail.

You may be wondering what else the film lies about given that its primary focus is the investigation surrounding the incident, rather than the incident itself that consumes the majority of the screentime.

Let’s make something very clear. The National Transportation Safety Board (NTSB), America’s authority that investigates every single incident involving an aircraft, much like our AAIB over here in the UK, are not in the business of witch-hunts or career assassinations. Their sole focus is to dispassionately assess every detail of an incident, investigate the options and the factors involved and then submit a report to advise if any changes need to be made to aircraft, operating procedures or to an airlines policies or personnel based on the established facts.

Such investigations have brought around some incredible advances in aviation safety and continuously make commercial air travel safer for us, the paying punter. It is important work, probably quite difficult work when picking through wreckages strewn with body parts from civilians caught up in whatever disaster they’ve been called to look at, and because of this we should be ever so thankful that they do what they do.

If it wasn’t for the NTSB and their counterpart agencies all around the world, we would still be flying around in airliners controlled by lunatics who haven’t slept in 16hours, who haven’t been trained to cope with simple failures because that particular airline didn’t think it was cost effective or relevant when it was an optional module in the training handbook, and we’d still be in aircraft with lethal faults because nobody would have taken the time to understand why controls were locking up and causing the planes to invert and then crash.

So it makes me just a teeny bit angry to see these unsung heroes of aviation safety being painted as power hungry, narrow minded, short sighted, incompetent, prejudgemental, ill informed villains hell-bent on destroying the careers of a pilot who made a risky call he felt was the right one at the time.

If the writer, one Todd Komarnicki, had wanted to make a film about a good people overcoming adversity, perhaps he should have written a proper piece of fiction that allowed that to happen. Don’t take a good thing and then shit all over until it resembles whatever cheap-sheet dirt you want to cook up and force down peoples throats. It’s almost as if he’s got an axe to grind with the NTSB and this is the only way he knows to get back at them for something. Was he turned down for a job with them?

What’s even more disappointing is that Clint Eastwood, a man whom I’m not terribly fond of or a fan of, but whom I respect as a talented filmmaker who has been responsible for some very nicely made features, could be involved in something as seedy and hateful as ‘Sully’.

This is a shame because on the surface, this isn’t a horrible film. Tom Hanks, in fairly typical Tom Hanks style, turns in a terrific performance as Sullenberger and manages to capture the bewilderment of the sudden fame and the shaken, post-traumatic trying-to-hold-it-together that one does after a scary episode.

There’s nothing here that automatically flags it as  bad film. Interactions between characters are, for the most part, fairly good and realistic, the camera is nicely placed to give us a sense of what those poor passengers were subjected to on that frigid afternoon and the pacing and editing is done in such a way that it helps you to build a jigsaw puzzle of the events; it may not happen in a logical order, but the end result is no less satisfactory.

But that’s the problem here. Because it doesn’t register as a bad film to the casual viewer, people will take this at face value and wonder why all the hate for the dude who did such a good job. They will learn nothing of real-world procedures or the events that took place and will only now the lies that they’ve been spoon fed by this film of ‘real’ events of things that ‘actually’ happened.

One of my struggles in life is to now resist the urge to track down and stalk both Messrs Komarnicki and Eastwood, grab them by their shirt with both hands, pull them close and then scream ‘Why? Why are you such a grunting moron,” into their faces before throwing them to the kerb and walking away.

If you want a good courtroom drama, watch an episode of ‘Star Trek: The Next Generation’ called ‘The Measure of a Man’, which not only covers the trials and tribulations of a legal case, but also approaches the topic of robotic sentience which will shortly be a real thing we – as a society – will have to consider very strongly. It’s well written, well acted and poignant. If you want something based on fact, then maybe go for an episode or two of ‘Judge Judy’.

These alternatives are shorter than ‘Sully’, but far, far better done or far, far more factual.

A reason why you should watch it: Because you don’t mind factual films being based solely on inaccuracies and lies.

A reason why you shouldn’t watch it: Because you saw the episode of ‘Air Crash Investigation’ which – even with its terrible $15 a day actors and Playstation2 era CGI – still did a much better job of telling the real story.

Previous: In space, nobody yells “cut” when it all goes wrong.
Next: CREEP-E