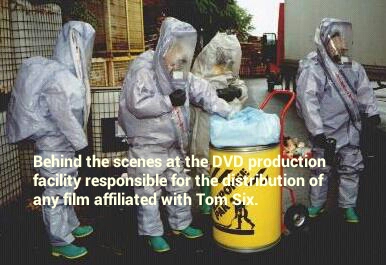 A look at the film ‘The Human Centipede 3’ directed by Tom Six.

I’ve tried to think of few ways to open this text. Part of me wanted to ramble a bit about how concept films are very much like concepts cars; interesting when it’s just a discussion over a pint with some friends, but totally impractical and unwanted in the real-world.

Another part of me wanted to begin with some sort of justification or disclaimer. For this is not a film that one should approach lightly. And while I am going public here and admitting that I sat through this voluntarily having already seen the preceding two films in the series, I had a reason for doing so.

I like films. They are stories that have been performed for our entertainment and enlightnement. They are visions into other worlds and have deeper meanings that can help us to understand and appreciate the world around us.

‘The Human Centipede 3’, nor either of its fore-runners for that matter, are entertaining, enlightening, visionary or contain any meanings or messages. This is a film of pure contempt and watches like a two-fingered salute to anyone who makes the mistake of viewing it.

Will saying this stuff not make people go and watch it? Why bang on about it if it’s that bad? So why give it publicity?

Answers to the questions above: Possibly. Someone has to. Because not all publicity is good publicity, despite what some may try to tell you. Also, my Facebook memories reminded me that today is the one-year anniversary since I saw this title and felt a sense of public duty to either warn people away from it or at least arm you with an expectation before you venture out in search of it.

My introduction to the ‘Centipede’  films came about from a hunt I’ve been on for around ten years now; to find a film that is fictional that can shock me. I’ve become a little de-sensitised to fiction. I struggle to find anything that makes me feel sickened or properly shocked. I won’t deny that some very well done films have made me want to shed a tear with Mrs Roy while the end credits roll, but nothing has truly disgusted me.

This search of mine has taken me through a rollercoaster of titles. ‘Serbian Film’. The short ‘Aftermath’ that focused on morgue necrophilia, even the theatrical cut of ‘Titanic’. But still I wasn’t left feeling truly disgusted or overwhelmed by the nastiness of them becuase I knew they weren’t real. And so I saw the ‘Centipede’ films as an opportunity to change that.

So, enough about how I found the films, what did I make of this one?

As alluded to above, nobody has ever made the mistake of confusing the ‘Centipede’ films for something that contributes to the world in a positive way. They are not, and never will be, regarded as anything more than terrible errors in judgement.

This third (and mercifully final installment) in the series is truly an awful, festering, agonising excersise in endurance. With some bad films, you can at least be grateful that they eventually ended. With ‘THC3’, you just feel dirty and unclean for even going near it in the first place and the end credits offer little consolation.

The shock factor of the first was simple; three helpless souls stitched together by a nutcase basement-surgeon as an experiment. Recall what I said in the opening paragraph about concepts.

But thank the heavens for it being a one-off, right?

That crazy Dutch bastard, Tom Six, went and did a second one saying stupid shit like, “This’ll make the first one look like a Disney movie,”. But what the hell is a sequel going to do differently for a film that had one trick and did it very badly?

The exact same trick again, but this time with a few extra people and a shallow attempt at a reason for the ‘sick bastard’ doing the deed to do what he does. And either as a nod to self-awareness or maybe for sheer personal masturbatory pleasure, Tom Six makes the sequel nutcase be inspired by the first film.

And if that little bit of self-pleasuring wasn’t enough, he then decides that the best way to make the third and closing chapter of this ‘trilogy’ come to be is to also declare the sequel as a piece of fiction within its own universe and make them inspiration for another nutcase to sew even more people together. This was a bad joke the first time Six tried it. It’s just excruciating this time around.

It’s not ‘sicker’ than its predecessors. It’s not cutting edge or offering anything new. It’s only difference is that for the first time, rather than just using the film as a means to create people stitched together, it tries to make it a consequence of a plot.

That’s right, folks. Tom Six has made an attempt at a plot. And guess what; it sucks arse. Presumably inspired by reports of hard-core Texan prison officials who don’t believe in human rights for hardcore criminals, this film pits a hapless warden and his unlikable sidekick against scores of violent and insuboriante offenders in the hot desert. And here’s where it gets better; Dieter Laser – aka first film nutcase – is the warden and Lawrence Harvey – aka second film nutcase – is his dogsbody.

So to summarise, not only does Six’s plot suck arse, so does his direction, his script and his casting. The lead actor sounds like he’s got a mouthful of molten toffee for the duration of the film. He’s unintelligible. Perhaps asking a German actor to manage the Texan accent wasn’t the smartest move, ranking about as low as the decision to spend real currency to make these God-awful films.

Six even gives himself a cameo in his own film… As himself! Can this guy love himself any more than he does already? Again, was this some sort of hint that he is self-aware? Having his on-screen self puking at the sight of the ‘realised’ human centipede showing that he really is a nice bloke deep-down, doesn’t feel at all redeeming since we know it’s not real and that he wrote and made the bloody film anyway.

I’m not going to tell you not to watch it. But I will warn you to lower your expectations significantly if you choose to try it out. While the peeps over at IMDB.com can be a bit emotional and sensitive, I think their score of 2.9 out of 10 (accurate at time of writing) is remarkaby generous and shows incredible generosity. Very few films ever score this low and this in itself should serve as a stark warning to anyone daring to walk these coals.

If you ‘like’ or are just curious about these ‘Centipede’ films, part 3 will do nothing for you. Just stick with the first two which shine like brilliant beacons of light when stacked up against this hogwash.

No wait… just do the first one. Even the second was overkill. Oh, God… Don’t do any of them. It’s all utter shite.

A reason why you should watch it: None.

A reason why you shouldn’t watch it: Tom Six.